Paducah, KY (07/03/2019) — Four-hundred and ninety. That is the record-breaking number of summer camp students at West Kentucky Community and Technical College's Challenger Learning Center at Paducah this year.

Students represent counties across the region and country. In Kentucky campers are from Ballard, McCracken, Calloway, Christian, Graves, Livingston, Marshall, Trigg, and Webster counties. Campers from Illinois are from Franklin and Massac counties. Others came from as far as California.

The CLC summer camps began with just 2, one-week camps in 2002, the first year the CLC opened. Thousands of youth have learned about science, technology, engineering and mathematics (STEM) in fun ways during the summers. Among the new campers, many keep coming back each year.

"We are greatly rewarded when we watch many campers grow up through the different stages of camp and then come back to volunteer for us," said Mellisa Duncan, center director. "Many students even opt to do some camps more than once; they love them so much."

Over the past 17 years, the number of participants isn't the only thing that's grown for the CLC summer camp program. The center's offerings have blossomed to include adventures such as spy, CSI, and aviation camps. Offerings have also been opened to a larger variety of age groups from kindergarten to age 16.

"Our staff strives to provide fun, quality STEM summer camp programming for our community and I believe our continued growing numbers show that we are doing just that," said Duncan. "Several of our camps are also unique to only our program such as the Underwater Astronaut Camp where participants learn to scuba and train underwater like astronauts."

The response to this year's more than 23 camps has left only two open. A few spots are still available for Astrotots: Cosmic Constellations on July 11 and Astrotots: Living in Space on July 18. Both camps are designed for kids going into kindergarten and first graders. Each will be held from 9 - 11 a.m. or 12:30 - 2:30 p.m. with a cost of $18.

Register at clcpaducah.org. Pre-registration is required. Information about other CLC programming can also be found on the website or by calling (270) 534-3101. 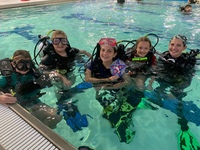