Please use this release. Note the date has been corrected to reflect event was on September 6. Thank you and we're sorry for the inconvenience.

Tech Connect was made available through part of the federally-funded GEAR UP (Gaining Early Awareness and Readiness for Undergraduate Programs) grant that was provided through the West Kentucky Educational Cooperative (WKEC). The partnership between WKEC and WKCTC included the services of the college's television department and four faculty members who reached the students through Facebook Live.

The students, who are interested information technology fields, watched the teleconference that was produced by the TV department and seen on media stations that were provided by WKEC's first year of its seven-year GEAR UP grant. The media stations were located in middle schools, high schools and three area technology centers in the ten counties WKEC serves: Ballard County, Caldwell County, Carlisle County, Crittenden County, Hickman County, Fulton County, McLean County and Fulton Independent, Paducah Independent, and Mayfield Independent school districts. The media stations are also planned to be used for business and industry outreach to students in the future.

Due to having so many questions throughout the two-hour teleconference, Senn and WKEC Project Director Terry Sullivan will make sure to respond to questions in the next several days that could not be answered due to time restraints. Students can also watch the teleconference on Facebook at a later time.

"The whole point is to get more kids thinking about coming to school here (WKCTC) while they're in middle school. Let's not wait until they are junior or seniors, or their freshman year in high school; let's get them earlier."

With over 350 unique views on Facebook, which meant that other schools, WKCTC faculty and staff and community members may have tuned into the feed, and nearly 40 questions from students during the event, Senn was thrilled with the response.

"I was so excited about the number of questions from students. They really seemed to be engaged and very interested in this. It was just a great opportunity. We will take what we've learned and hope to make this event even more successful next year." 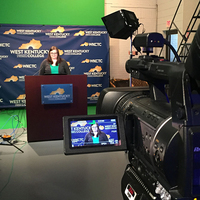